A query investigated this week from a Scottish employers auditor was why a Scottish resident tax payer had not been calculated at the Scottish starter tax rate of 19% when in the first month of their employment.

The reality is that you cannot be a Scottish tax payer until HMRC say so! Equally the auditor did not understand how to calculate free pay under the operation of PAYE, or what amount is taxable.

So when is a Scottish resident tax payer issued with a Scottish tax code? Only from the passing through of a P45 with a tax code preceded with ‘S’, or similar from a P6, P6B, or a P9 issued by HMRC.

If a Scot turns up to a new employment without a P45 and either they or their employer complete the HM Revenue and Customs Starter Checklist, then they are not a Scottish taxpayer (yet).

Completing the form and ticking box A will result in the application of 1250L rest of the UK (rUK) tax code and tax calculation. Box B in 1250L week 1/month 1 rUK, and box C in rUK tax code BR. 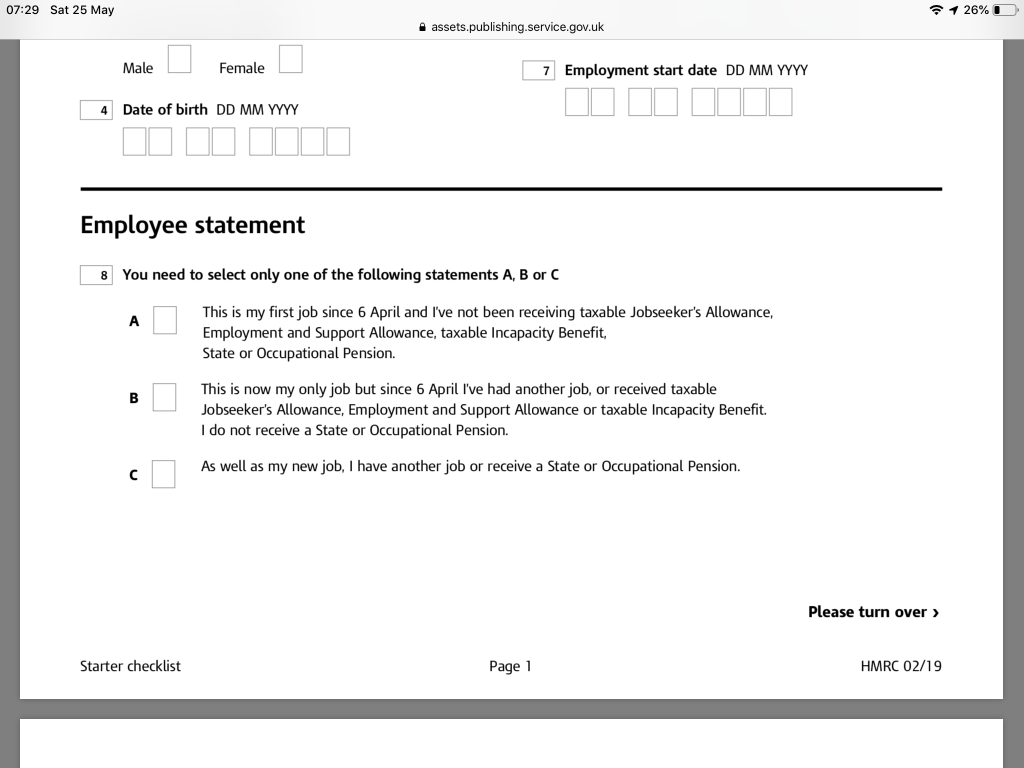 If the employer does not ask their employee without a P45 to complete a starter checklist, or the employee does not return it, then they will have applied an rUK 0T W1/M1 tax code. They are not a Scottish taxpayer (yet) even if their residential address indicates otherwise.

There around 1/2 million new employments identified from RTI data where the starter information is C undeclared with 0T W1/M1. Why? The new starter checklist is a fundamentally required on boarding document that must form part of the HR process.

And the same applies for Wales. You can only be a Welsh tax payer if the either HMRC say so or the P45 indicates it. Anyone with no P45 will be a rUK taxpayer until HMRC issue a replacement tax code.

So in this case there were two fundamental errors in the auditors calculation. The employee had no P45 and had completed the starter checklist tick box B. Their starting tax rate was therefore the rUK rate of 20%.

The other common mistake is thinking that free pay is calculated by dividing the annual allowance by 12 – its not. That will not derive the Table tax free value. The annual allowance of £12,500 may derive a tax code of 1250L, however, that indicates a free pay based on 1250 x 10 and then add 9 = £12,509. The third is forgetting to truncate the amount to be taxed.

So if you are wanting to ensure that you are a Scottish (or for that matter Welsh) tax payer, pass across your P45 with a relevant tax code when you start employment, or contact HMRC and have them issue your new employer with the correct tax code. Or you will have to live with being a rest of the UK taxpayer until they catch-up and issue the correct prefix.

Will HMRC change the starter checklist to allow the employee or employer to declare their tax residency status being Scottish (or Welsh). It’s been asked for, but currently not a reality.

One thought on “You’re not a Scottish Tax payer”