In the House of Lords on Wednesday 5th June 2019, Lord Henley confirmed that in 2018, the HM Revenue and Customs National MinimumWage audit and enforcement team ‘completed some 3,000 investigations and issued £17 million in financial penalties to more than 1,000 non-compliant employers’.

On the recommendations of Sir David Metcalf whilst some elements of NMW enforcement are under review, it was also confirmed that although Lord Henley ‘would not want to use the word “suspended”….that naming and shaming was still there and available, but that while we were reviewing the scheme we were not using it’.

Although on the face of it Minimum Pay May be considered a simple process (it’s not) of paying relevant workers at or above a certain hourly rate, minimum pay is not about the hourly pay rate, but about the rate of pay as a result of payments which count towards earning for minimum pay minus certain deductions used for comparison divided by worked time, and paid in accordance with strict timing rules.

Some HMRC interpretations of pay and deductions have been challenged such as the Middlesbrough Football Club case, and the soon to be heard Iceland Christmas savings club.

BEIS results on the recent consultation on salaried workers and salary sacrifice impacts is yet to be published.

Hopefully the government will move forward with proposals that remove technical detail interpretive traps to a more straight forward case of easy operation in showing that minimum legal payments have actually been made.

In the meantime and until the current review is completed, the naming and shaming programme has been suspended (ie ‘were not using it’) 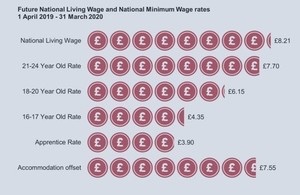